Tiddles Is Down Tippler 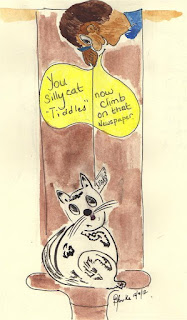 Tiddles is down Tippler
I remember them owd tipplers too,
Wow! what memories come flooding back.
Them cowd neets having to go out theer,
Wi candle at first, then later came torch.
It was down at bottom of back yard,
It was in a lean too, with a squeaky hinged dooer.
Sitting on top of that "long drop" they called “tippler”.

It must have been about twenty foot drop.
Or it seemed that deep through a child’s eyes.
It still today brings the “shivers” to my booens,
To think about them cold, dark, wintry neets.
Candle kept blowin out and all appeared so spooky.
In corner was a pile of “torn up newspaper”,
This was used to wipe thi bum, rich folk used “San Izal”,
But for us, and most “yesterdays news” it was.

A remember once (maybe twice), cat gooin missing,
A faint “mee how” was heard, comin from down tippler.
“Mum, mum, cats darn tippler! a can see it perched on ledge”.
She’d come out with this long ball of string,
A think she rolled up a newspaper, and tied it on end of string,
And we’d lower it down, gently does it.
Cat wi coaxing would jump from ledge on to “perch”,
And we’d heave up string, to get her back.

Sink watter went from inside house from kitchen sink to tippler,
By means of hidden pipes I’m sure, it crossed that yard below,
It filled the “tippler” to a point, where then it “tippled” over and away.
All this I never give it a thought, as a young un, as if I would.
But it all meks sense nowadays to what med it work.
So tippler toilet that tipped away,
Now your gone, never to see another day,
And at that some would probably say,
That’s no problem and well OK.
Bryan Yorke – 12th September 2012.