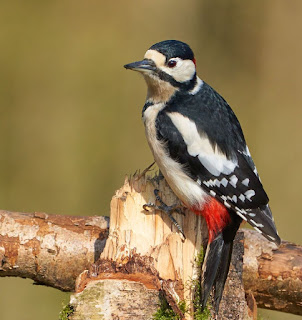 Pecker, not one but two doth drum and prod and peck those rotted trunks.
Belated echo from this side to that side and back with just the lane between,
Whilst Nuthatch calls fast whip, whip, whip, but never so fast as pecker pecks.

Bordered walls of pure green which does not change its shade, nor darkens,
with age whatever the time of year, Its velvet look and feel so soft and kind to touch,
so snug its cover, and fits those fossils like it’s glove.

Pecker, its time for you to mate, and make your holey place to rest and nest,
You’ve chose that peaceful hallowed place where many souls do lie,
That place to see the deer run past, the doe and fawn amongst it’s cast.

And from that budding canopy, the distant lure of constant chorus sings out,
so sweet a sound you’ll ever hear, approaching love is all so near.

(20th January 2014 whilst walking down the small lane (Dicken Lane) which lies between Pear Tree Cottage and Dalton Lane, Great Spotted Woodpeckers were calling to each other from within the Dalton Woodland Burial Ground and the woodland on the opposite side of the lane and it gave the initial impression of a "echoed" sound. Besides the air was filled with many other singing birds telling you that "love is in the air" )